On Living and Dying Well (Paperback) 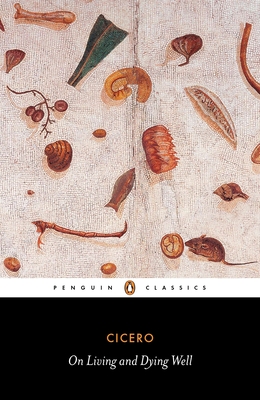 On Living and Dying Well (Paperback)


Special Order
Philosophical writings on “the good life” by the great Roman orator, in a vital new translation

In the first century BC, Marcus Tullius Cicero, Roman orator, statesman, and defender of republican values, created these philosophical treatises on such diverse and trenchant topics as friendship, religion, death, fate, and scientific inquiry. This lucid and lively new translation renders the great Roman’s writings accessible to modern readers as never before. Cicero was a pragmatist at heart, but his philosophies were frequently personal and ethical, drawn not from abstract reasoning but from careful observation of the world. The resulting work reminds us of the importance of social ties, the question of free will, and the justification of creative endeavor.

For more than seventy years, Penguin has been the leading publisher of classic literature in the English-speaking world. With more than 1,700 titles, Penguin Classics represents a global bookshelf of the best works throughout history and across genres and disciplines. Readers trust the series to provide authoritative texts enhanced by introductions and notes by distinguished scholars and contemporary authors, as well as up-to-date translations by award-winning translators.
Marcus Tullius Cicero (106-43 BC), Roman orator and statesman, was born at rural Arpinum (in the south of modern Italy) to a wealthy local family. He was taken to Rome for his education with the idea of a public career and, by the year 70 BC, he had established himself as the leading barrister in Rome. In the meantime, his political career was well under way and he was elected praetor in 66 BC. In addition to his speeches, Cicero produced a large number of works on the theory and practice of rhetoric, on religion, and on moral and political philosophy. He was put to death in 43 BC.

Thomas Habinek is Professor of Classics at University of Southern California. His most recent books include The World of Roman Song: From Ritualized Speech to Social Order and Ancient Rhetoric and Oratory. He is an editor of the journal Classical Antiquity and editor of the book series Classics and Contemporary Thought.