The Rope and Other Plays (Large Print / Paperback) 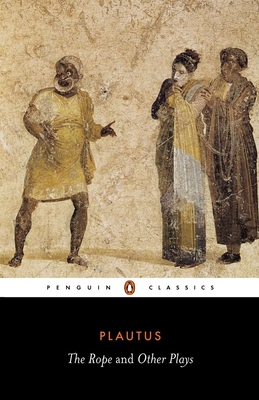 Brilliantly adapting Greek New Comedy for Roman audiences, the sublime comedies of Plautus (c. 254-184 BC) are the earliest surviving complete works of Latin literature. The four plays collected here reveal a playwright in his prime, exploring classic themes and developing standard characters that were to influence the comedies of Shakespeare, Molière and many others. In The Ghost, a dissolute son who has squandered his father's money is thrown into disarray when he returns from abroad, a theme that is explored further in the comedy of errors A Three-Dollar Day. In The Rope—regarded by many as the best of Plautus' plays—the shipwreck of a pimp and his slaves leads to the touching reunion of a father and his daughter, while Amphitryo, Plautus's only excursion into divine mythology, offers a cheerful account of how Jupiter became father to Hercules.

Titus Maccius Plautus was born in Sarsina, Umbria, in about 254 BC, and was originally named, after his father, Titus. Little is known of his life, but it is believed that he went to Rome when young and worked as a stage assistant. His potential as an actor was discovered and he acquired two other names: Maccius, derived perhaps from the name of a clown in popular farce, and Plautus, a cognomen meaning "flat-footed." Somehow Plautus saved enough capital to go into business as a merchant shipper, but this venture collapsed, and he worked (says the tradition) as a miller’s laborer, and in his spare time studied Greek drama. From the age of forty onwards he achieved increasing success as an adaptor of Greek comedies for the Roman stage. Much of his work seems to be original, however, and not mere translation. He was rewarded by being granted Roman citizenship. According to Cicero he died in 184 BC.

E.F. Watling was educated at Christ's Hospital and University College, Oxford. His translations of Greek and Roman plays for the Penguin Classics include the seven plays of Sophocles, nine plays of Plautus, and a selection of the tragedies of Seneca.