Running from the Law: A Novel (Paperback) 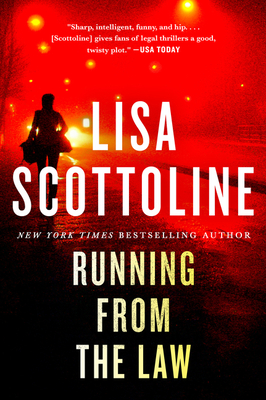 Running from the Law: A Novel (Paperback)

“Lisa Scottoline is one of the very best writers at work today.”—Michael Connelly

A wisecracking lawyer takes on the defense of a prominent federal judge accused of sexual harassment, but all bets are off when the case turns deadly in this page-turning thriller from #1 bestselling author Lisa Scottoline—her classic novel, now available in trade paperback for the first time.

Whether it's at the poker table or in a court room, wisecracking attorney Rita Morrone plays to win, especially when it comes to her latest case, which is also her most personal. She’s defending the Honorable Fiske Hamilton, a prominent federal judge accused of sexual harassment. It’s no coincidence her client happens to be her live-in lover’s father.

When the action suddenly turns deadly, Rita finds herself at the center of a murder case. The search for answers plunges her deep into the investigation, uncovering a secret life and suspects in shocking places. Then the killer viciously ups the ante. To end this lethal game, Rita will lay it all on the line for the highest stakes ever—her life.

Lisa Scottoline is a #1 bestselling and award-winning author of more than thirty-two novels. She also co-authors a bestselling non-fiction humor series with her daughter, Francesca Serritella. There are more than thirty million copies of Lisa's books in print in more than thirty-five countries. She lives in Pennsylvania with an array of disobedient but adorable pets.

“Solid gold. Scottoline’s hardcover debut is a keeper, with a heroine who’s almost as funny as she thinks she is which puts her miles ahead of most other lawyers you know.” — Kirkus Reviews (starred review)

"Rita Morrone has a smart way with words and a shifty code of ethics, attributes that give this Philadelphia trail lawyer a jump on the legal competition." — New York Times Book Review