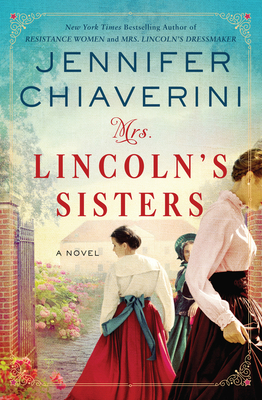 “A fascinating glimpse into the women of an influential family on the front lines of some of the most important moments of that indelible time."--Booklist

The New York Times bestselling author of Mrs. Lincoln’s Dressmaker returns to her most famous heroine, Mary Todd Lincoln, in this compelling story of love, loss, and sisterhood rich with history and suspense.

In May 1875, Elizabeth Todd Edwards reels from news that her younger sister Mary, former First Lady and widow of President Abraham Lincoln, has attempted suicide.

Mary’s shocking act followed legal proceedings arranged by her eldest and only surviving son that declared her legally insane. Although they have long been estranged, Elizabeth knows Mary’s tenuous mental health has deteriorated through decades of trauma and loss. Yet is her suicide attempt truly the impulse of a deranged mind, or the desperate act of a sane woman terrified to be committed to an asylum? And—if her sisters can put past grievances aside—is their love powerful enough to save her?

Maternal Elizabeth, peacemaker Frances, envious Ann, and much adored Emilie had always turned to one another in times of joy and heartache, first as children, and later as young wives and mothers. But when Civil War erupted, the conflict that divided a nation shattered their family. The Todd sisters’s fates were bound to their husbands’ choices as some joined the Lincoln administration, others the Confederate Army.

Now, though discord and tragedy have strained their bonds, Elizabeth knows they must come together as sisters to help Mary in her most desperate hour.

Jennifer Chiaverini is the New York Times bestselling author of several acclaimed historical novels, including Mrs. Lincoln’s Sisters and Resistance Women, as well as the beloved Elm Creek Quilts series. A graduate of the University of Notre Dame and the University of Chicago, she lives with her husband and two sons in Madison, Wisconsin.

"How did former first lady Mary Todd Lincoln fall from grace to incarceration at Bellevue Place?...Chiaverini builds a beliavable domestic sphere in which the women surrounding Mary--women who have also mourned the losses of husbands and children--try to puzzle out when she began to lose her sanity....An engaging glimpse of women's privilege and anguish during the Civil War era." — Kirkus Reviews

" Through meticulously researched historical detail and sympathetic portrayal of each character, including Mary herself, Chiaverini provides a fascinating glimpse into the women of an influential family on the front lines of some of the most important moments of that indelible time." — Booklist

“Chiaverini’s many fans, and every historical fiction reader who enjoys strong female characters, will find much to love in this revealing WWII novel.” — Booklist on Resistance Women

“A riveting, complex tale of the courage of ordinary people.” — Kirkus Reviews on Resistance Women

“Chiaverini offers an intimate and historically sound exploration of the years leading up to and through WWII . . . exceptionally insightful, making for a sweeping and memorable WWII novel.” — Publishers Weekly on Resistance Women