The Case Against Socialism (Hardcover) 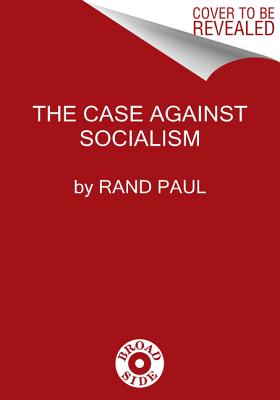 A recent poll showed 43% of Americans think more socialism would be a good thing. What do these people not know?

Socialism has killed millions, but it’s now the ideology du jour on American college campuses and among many leftists. Reintroduced by leaders such as Bernie Sanders and Alexandria Ocasio-Cortez, the ideology manifests itself in starry-eyed calls for free-spending policies like Medicare-for-all and student loan forgiveness.

In The Case Against Socialism, Rand Paul outlines the history of socialism, from Stalin’s gulags to the current famine in Venezuela. He tackles common misconceptions about the “utopia” of socialist Europe. As it turns out, Scandinavian countries love capitalism as much as Americans, and have, for decades, been cutting back on the things Bernie loves the most.

If socialism takes hold in America, it will imperil the fate of the world’s freest nation, unleashing a plague of oppressive government control. The Case Against Socialism is a timely response to that threat and a call to action against the forces menacing American liberty.

U.S. Senator Rand Paul, M.D., is one of the nation’s leading advocates for liberty. Elected to the United States Senate in 2010, he has proven to be an outspoken champion for constitutional liberties and fiscal responsibility.

Kelley Ashby Paul serves as Kentucky co-chair of Helping A Hero, a wounded veterans charity that has built over 100 fully adapted homes for soldiers who have suffered severe injuries.  Kelley also serves on the board for the Coalition for Public Safety, a bipartisan organization dedicated to criminal justice reform.

Rand and Kelley have been married since 1990 and are the parents of three sons.

“You wouldn’t think a book like this would be necessary but it is, and thank God we have it. Pay special attention to chapter 19, ‘Socialism Becomes Authoritarianism.’ It does, every time.”
— Tucker Carlson

&#8220Anyone who loves America—our freedom, our Judeo-Christian tradition— must read this book. Thanks to Rand Paul for reminding all of us of the perils of today’s faddish belief that more government control will make us happier.”
— Laura Ingraham, Fox News host, The Ingraham Angle

“No U.S. senator in the modern era can rival Senator Rand Paul’s fidelity to the first principles of the free market. In this no-holds-barred and fun-to-read broadside, Paul shows why and how he stands alone in defending your right to engage in economic activities free from government intrusion and your constitutional right to a federal government that spends less than it takes. He also demonstrates how everything the central planners touch turns into dust.”
— Judge Andrew P. Napolitano, senior judicial analyst, Fox News Channel, and bestselling author

“I grew up in China during one of history’s darkest eras: Mao’s socialistic Cultural Revolution. I appreciate the freedom that I have now in America so much because I used to not have it. All Americans need to read The Case Against Socialism, so that we will be reminded just how precious our freedom and our country are.”
— Ming Wang, MD, PhD, Nashville, TN