American Prophets: The Religious Roots of Progressive Politics and the Ongoing Fight for the Soul of the Country (Hardcover) 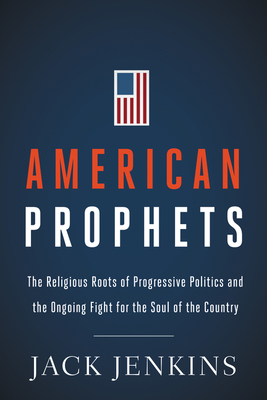 American Prophets: The Religious Roots of Progressive Politics and the Ongoing Fight for the Soul of the Country (Hardcover)

From one of the country’s most respected religion reporters, a paradigm-shifting discussion of how the Religious Left is actually the moral compass that has long steered America’s political debates, including today.

Since the ascendancy of the Religious Right in the 1970s, common wisdom holds that it is a coalition of fundamentalist powerbrokers who are the “moral majority,” setting the standard for conservative Christian values and working to preserve the status quo.

But, as national religion reporter Jack Jenkins contends, the country is also driven by a vibrant, long-standing moral force from the left. Constituting an amorphous group of interfaith activists that goes by many names and takes many forms, this coalition has operated since America’s founding — praying, protesting, and marching for common goals that have moved society forward. Throughout our history, the Religious Left has embodied and championed the progressive values at the heart of American democracy—abolition, labor reform, civil rights, environmental preservation.

Drawing on his years of reporting, Jenkins examines the re-emergence of progressive faith-based activism, detailing its origins and contrasting its goals with those of the Religious Right. Today’s rapidly expanding interfaith coalition — which includes Christians, Jews, Muslims, Buddhists, and other faiths — has become a force within the larger “resistance” movement. Jenkins profiles Washington political insiders—including former White House staffers and faith outreach directors for the campaigns of Barack Obama, John Kerry, and Hillary Clinton—as well as a new generation of progressive faith leaders at the forefront today, including:

An exciting reevaluation of America’s moral center and an inspiring portrait of progressive faith-in-action, American Prophets will change the way we think about the intersection of politics and religion.

JACK JENKINS is a national reporter for Religion News Service and a former Senior Religion Reporter for ThinkProgress. His work has also been published in The Atlantic and the Washington Post, and he is cited regularly in the New York Times, The New Yorker, the Wall Street Journal, National Public Radio, MSNBC, and other top media outlets. He is a regular guest on radio shows and podcasts, including ABC, BBC, various NPR affiliates, Sirius XM, Vox.com’s Today Explained podcast, and many others. A graduate of Presbyterian College, Jenkins earned his Master of Divinity at Harvard University.

"Jenkins is my go-to source when I want a snapshot of what’s happening in the American religious landscape... demonstrating how a vibrant and undeterred Religious Left has filled the moral vacuum with an unapologetically progressive agenda promoting peace, pluralism, and human dignity for all." — Reza Aslan, author of Zealot: The Life and Times of Jesus of Nazareth

"A master storyteller." — Brian D McLaren, author of The Great Spiritual Migration and A New Kind of Christianity

“Illuminating . . . [A] thoroughly reported and . . . revelatory history about the intersection of progressive politics and religion in America.” — Publishers Weekly

“Delves deeply into the origins, activities, and leadership of the Religious Left . . . highlighting the widespread—though not always widely recognized—role that progressive faith communities have long held in political and social causes. . . . A well-researched and timely work of journalism.” — Kirkus Reviews

“American Prophets offers a fresh viewpoint that would not likely be noticed without the careful attention and study Jenkins put into his research, and it offers hope to those who may be experiencing dismay at the current political scene in this country." — New York Journal of Books

“Jenkins proves an able and engaging guide through all of these progressive movements. He approaches his subject through the personal stories of those intimately involved in the efforts he explores, and readers will see in his telling the human dimension of these broader justice campaigns." — National Catholic Reporter

“A contemporary ‘Lives of the Saints’—a series of profiles of admirable leftist activists whose politics are motivated by their faith. . . . The problem isn’t that there has not yet been a potent religious left; it’s that the ‘religious’ part is too often left out.” — The New Yorker

“For those who find the Religious Right suffocating, American Prophets will be balm to the soul. Jenkins describes a prophetic voice that encompasses a pro-life view for all humanity and family values for all sorts of families.” — Spectrum Magazine

“Jenkins helps us see the other part of that story: the faith-driven struggle by Jews, Muslims, Christians, Buddhists, Earth-centered religionists, and “nones” as well, to write a new and more hopeful chapter in our communal life.”  — The Progressive

“Jenkins is an outstanding journalist. His coverage of politics for the Religion News Service is the gold standard among religion reporters. Those skills are evident in the 12 mostly disconnected stories he tells here about religious activists advocating for progressive causes.”  — Christianity Today