Resist: 35 Profiles of Ordinary People Who Rose Up Against Tyranny and Injustice (Hardcover) 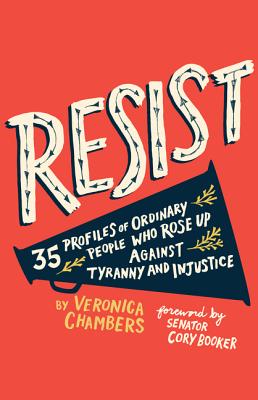 Resist: 35 Profiles of Ordinary People Who Rose Up Against Tyranny and Injustice (Hardcover)

A perfect tool for young readers as they grow into the leaders of tomorrow, Veronica Chambers’s inspiring collection of profiles—along with Senator Cory Booker’s stirring foreword—will inspire readers of all ages to stand up for what’s right.

You may only be one person, but you have the power to change the world.

Before they were activists, they were just like you and me. From Frederick Douglass to Malala Yousafzai, Joan of Arc to John Lewis, Susan B. Anthony to Janet Mock—these remarkable figures show us what it means to take a stand and say no to injustice, even when it would be far easier to stay quiet.

Resist profiles men and women who resisted tyranny, fought the odds, and stood up to bullies that threatened to harm their communities. Along with their portraits and most memorable quotes, their stories will inspire you to speak out and rise up—every single day.

Veronica Chambers is best known for her critically acclaimed memoir, Mama’s Girl. Most recently, she was the editor of The Meaning of Michelle: 16 Writers on the Iconic First Lady and How Her Journey Inspires Our Own, which Time magazine named one of the Top Ten Nonfiction Books of 2017. She has written more than a dozen books for young readers and cowritten New York Times bestselling memoirs with Robin Roberts, Eric Ripert, Senator Cory Booker, and many others. Visit her online at www.veronicachambers.com.

“Most readers will find stories they haven’t heard before in this volume and will discover new inspiration from the familiar. Despite their subjects’ renown, they are presented so that their strength is inspiring rather than overwhelming. A resource to enrich the shelves of every home and library.” — Kirkus Reviews (starred review)