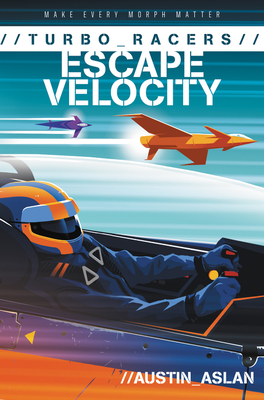 This is book number 2 in the TURBO Racers series.

The Fast and the Furious meets Transformers in the second book of this high-stakes series about twelve-year-old Mace Blazer, who pilots state-of-the-art vehicles that transform seamlessly to race on the road, in the air, and even underwater.

Mace Blazer is the world’s hottest TURBOnaut. Compared to the other ‘nauts, he drives faster, dares harder, and pulls the craziest stunts. Since he won the Gauntlet Prix and revealed that he’s only twelve, the world has been screaming Mace’s name.

Now nothing—not even his friends and family—can hold Mace back from becoming the greatest racer of all time.

But when Mace suffers a nearly fatal accident while behind the wheel, he loses the nerve that made him the best. He’s done with driving fast. He’s done with TURBO. Until he finds out that his two best friends have mysteriously disappeared as part of a sinister plot that could destroy not just TURBO, but the world. Mace has no choice but to buckle back in, swallow his fears, and race to save the day.

In the thrilling sequel to TURBO Racers: Trailblazer, Mace will have to decide if he’s willing to risk everything to save the sport, and the people, that he loves. Every morph matters in this heart-pounding, exhilarating adventure series by acclaimed author Austin Aslan.

Austin Aslan is the author of the TURBO Racers and the Islands at the End of the World books. Austin has a master’s in conservation biology and was an ecotourism Peace Corps volunteer in a Honduran cloud forest. He resides in northern Arizona with his ecologist wife and two children and was recently elected to the Flagstaff City Council.

"An exhilarating read that doesn’t compromise on fun in its exploration of integrity and friendship. Heartily recommended for fans of sf and sports books alike.” — Booklist