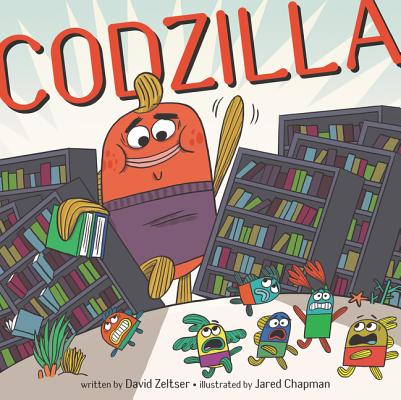 Codzilla is a heartfelt and hilarious picture book based on the classic school story of bully vs. brains—perfect for fans of favorites such as SpongeBob SquarePants, The Pout-Pout Fish, Ninja Baby, and Vegetables in Underwear!

Bertie is the BIGGEST codfish in school. He loves reading about sharks more than anything, but he’s teased about his size by the littler fish in his school. When they start calling him Codzilla, he gets fed up and starts living up to the name.

But when danger strikes from the deep in the form of a shark, Bertie must use his vast shark knowledge and his sizeable heart to save his friends.

David Zeltser is the author of the picture books Ninja Baby, The Universe Ate My Homework, and The Night Library as well as the chapter books Lug: Dawn of the Ice Age and Lug: Blast from the North. Just like the main character in his picture book Codzilla, when David was teased in school for being different, he took solace in reading, especially books about animals. In his twenties he worked with many amazing creatures, including owls and giraffes, and even once helped care for a baby rhino. David now lives by the ocean in Santa Cruz, California, with his family. Visit him at www.davidzeltser.com.

Jared Chapman is the author-illustrator of the popular book Vegetables in Underwear and Fruits in Suits. Other books he has written and illustrated include Steve, Raised by Wolves and Pirate, Viking & Scientist. He is the illustrator of Wordplay and several other picture books. Jared was born in Louisiana, grew up in Texas, went to college in Georgia, and now calls the piney woods of northeast Texas his home. Visit him at www.jaredchapman.com.