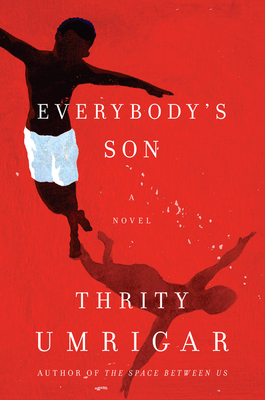 This book touches on a lot of very delicate subjects, and Thrity Umrigar handles them with care. A young, black boy is "rescued" from his drug addicted mother by an affluent white couple that sets into motion the events of Anton's future. I had so much optimism for the characters. I wanted everyone to succeed and lessons to be learned. You will have so much compassion for Anton and the situation that he has found himself in.

The bestselling, critically acclaimed author of The Space Between Us and The World We Found deftly explores issues of race, class, privilege, and power and asks us to consider uncomfortable moral questions in this probing, ambitious, emotionally wrenching novel of two families—one black, one white.

During a terrible heat wave in 1991—the worst in a decade—ten-year-old Anton has been locked in an apartment in the projects, alone, for seven days, without air conditioning or a fan. With no electricity, the refrigerator and lights do not work. Hot, hungry, and desperate, Anton shatters a window and climbs out. Cutting his leg on the broken glass, he is covered in blood when the police find him.

Juanita, his mother, is discovered in a crack house less than three blocks away, nearly unconscious and half-naked. When she comes to, she repeatedly asks for her baby boy. She never meant to leave Anton—she went out for a quick hit and was headed right back, until her drug dealer raped her and kept her high. Though the bond between mother and son is extremely strong, Anton is placed with child services while Juanita goes to jail.

The Harvard-educated son of a US senator, Judge David Coleman is a scion of northeastern white privilege. Desperate to have a child in the house again after the tragic death of his teenage son, David uses his power and connections to keep his new foster son, Anton, with him and his wife, Delores—actions that will have devastating consequences in the years to come.

Following in his adopted family’s footsteps, Anton, too, rises within the establishment. But when he discovers the truth about his life, his birth mother, and his adopted parents, this man of the law must come to terms with the moral complexities of crimes committed by the people he loves most.

“[Umrigar’s] focus has always been on the Indian and Indian American experience, but here she crosses borders to examine tough and timely issues concerning a black family, a white family, and our children today.”
— Library Journal

“Everybody’s Son probes directly into the tender spots of race and privilege in America…With assured prose and deep insight into the human heart, Umrigar explores the moral gray zone of what parents, no matter their race, will do for love.”
— Celeste Ng, author of Everything I Never Told You

“Umrigar hits us in three places at once: the head, the heart... the gut. With clarity of vision, she takes on the story of a neglected black boy…[Anton] is a character for our times as we… try and build bridges across the racial and economic canyons that divide us.”
— David Abrams, author of Fobbit and Brave Deeds

“A potent examination of race and privilege.”
— Booklist

“…[A] powerful exploration of the crucible of privilege and the raw, hard consequence of broken trust…[A] taut, exquisitely moving love story about desire... forgiveness, and the transcendent bond between a parent and child. Umrigar is a gifted storyteller, and her fiction has a revelatory force on the page.”
— Dawn Tripp, author of Georgia

“[Anton’s] personal journey is a moving one that many fiction readers can appreciate.”
— Library Journal

“Through this disturbing yet evocative tale, Umrigar — best known for her books “The Space Between Us” and “The World We Found” — offers a troubling look at race and the conflicting desires of two families.”
— Washington Post

“Through strong characterizations and a compassionate, compelling narrative, Thrity Umrigar explores the assumptions and complexities of identity, race and class — and the meaning of family.”
— Minneapolis Star Tribune

“Be forewarned: this novel is not a beach read… It’s a book that will leave you unsettled and haunted.”
— W Magazine

“Everybody’s Son is an example of powerful and uncomplicated writing which pushes your borders and leaves you at the edge of a mountain top. The only option you have is to jump. And jump you will.”
— The Free Press Journal

“Heartbreaking… The complexity of ethical decisions emerges as the characters find themselves in situations where no choice seems faultless.”
— Christian Century

“Umrigar’s novel examines complex social issues with brutal honesty, but also creates accessible characters with relatable motives, reminding us of the deep-seated racism that exists even in the places we don’t think to look.”
— Publishers Weekly (starred review)