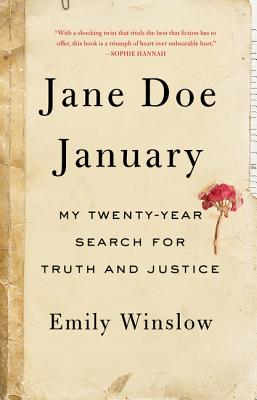 By Emily Winslow
Email or call for price
Hard to Find

In the vein of Alice Sebold’s Lucky, comes a compelling, real-life crime mystery and gripping memoir of the cold case prosecution of a serial rapist, told by one of his victims.

On the morning of September 12, 2013, a fugitive task force arrested Arthur Fryar at his apartment in Brooklyn. His DNA, entered in the FBI’s criminal database after a drug conviction, had been matched to evidence from a rape in Pennsylvania years earlier. Over the next year, Fryar and his lawyer fought his extradition and prosecution for the rape—and another like it—which occurred in 1992. The victims—one from January of that year, the other from November—were kept anonymous in the media. This is the story of Jane Doe January.

Emily Winslow was a young drama student at Carnegie Mellon University’s elite conservatory in Pittsburgh when a man brutally attacked and raped her in January 1992. While the police's search for her rapist proved futile, Emily reclaimed her life. Over the course of the next two decades, she fell in love, married, had two children, and began writing mystery novels set in her new hometown of Cambridge, England. Then, in fall 2013, she received shocking news—the police had found her rapist.

This is her intimate memoir—the story of a woman’s traumatic past catching up with her, in a country far from home, surrounded by people who have no idea what she’s endured. Caught between past and present, and between two very different cultures, the inquisitive and restless crime novelist searches for clarity. Beginning her own investigation, she delves into Fryar’s family and past, reconnects with the detectives of her case, and works with prosecutors in the months leading to trial.

As she recounts her long-term quest for closure, Winslow offers a heartbreakingly honest look at a vicious crime—and offers invaluable insights into the mind and heart of a victim.

Emily Winslow is an American living in Cambridge, England. She is the author of the novels The Whole World, The Start Of Everything, and The Red House.

“With a shocking twist that rivals the best that fiction has to offer, this book is a triumph of heart over unbearable hurt. Everyone should read it.”
— Sophie Hannah, author of The Monogram Murders

“In JANE DOE JANUARY, Emily Winslow has created a new genre. This book unwinds like a page-turning mystery novel while, with gut-wrenching perspective, it embodies the most elegant of personal journalism. I’ve never read anything like it.”
— Julia Heaberlin, author of Black-Eyed Susans

“This factual, fascinating and forensically cool memoir lays out the legal process almost as a police procedural. Then each time Winslow puts aside her detachment to express rage, contempt, impatience, love and gratitude, the memoir takes on a devastating emotional white heat. JANE DOE JANUARY had me gripped and furious.”
— Eliza Graham, author of The One I Was

“JANE DOE JANUARY should be required reading for any person who is in a position to interact with victims of crimes.”
— Retired Commander Bill Valenta of the Pittsburgh Police, the original detective from the case

“JANE DOE JANUARY is an extraordinary memoir, written with the skill of a master novelist in beautiful, haunting prose. This story should prompt serious discussion and is one of the most important memoirs on sexual assault you will ever read. Her courage in telling it is breathtaking.”
— Allison Leotta, author of A Good Killing and a former sex-crimes prosecutor for Washington DC

“A powerful memoir of survival from a great writer.”
— Lisa Gardner, author of Crash and Burn

“This riveting, courageous story would be unbelievable if it weren’t so heartbreakingly true. Told in elegant-yet-unflinching style by a writer of considerable skill, JANE DOE JANUARY is one of the most compelling memoirs you will ever read.”
— Brad Parks, author of The Fraud

“Winslow’s precision and clarity disallow us the easy exit of ‘I can’t imagine...’ You don’t have to imagine. She’s drawn an eloquent, exacting map of what it feels like to dangle on the whims of justice. Life is a finer thing when we understand.”
— Jamie Mason, author of Monday's Lie

“The sheer bravery of the memoir alongside the lyrical writing style make it a compelling and ultimately uplifting read.”
— Kate Rhodes, author of The Winter Foundlings

“This important chronicle answers the question, does it serve justice to put a man on trial for a 20-year-old crime?...This eloquent memoir will be appreciated by anyone interested in cold case investigations and victim advocacy as well as true crime fans.”
— Library Journal (starred review)