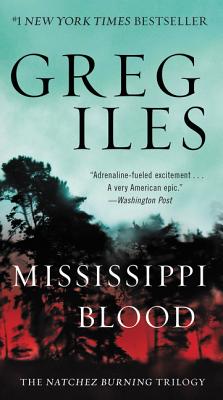 This is book number 6 in the Penn Cage series.

“Mississippi Blood is the culmination of the Natchez Trilogy, which follows characters who are trying to get to the bottom of brutal Civil Rights-era crimes. Penn Cage watches as the world around him calls into question everything he thinks he knows, including the moral fortitude of his father. Rippling with parallels to our everyday America, Mississippi Blood will, hopefully, push us all to recognize the truths about ourselves and our country.”
— Veronica Brooks-Sigler (E), Octavia Books, LLC, New Orleans, LA

“Natchez Burning is extraordinarily entertaining and fiendishly suspenseful. I defy you to start it and find a way to put it down; as long as it is, I wished it were longer. . . . This is an amazing work of popular fiction.”
— Stephen King

“One of the longest, most successful sustained works of popular fiction in recent memory… Prepare to be surprised. Iles has always been an exceptional storyteller, and he has invested these volumes with an energy and sense of personal urgency that rarely, if ever, falter.”

The endgame is at hand for Penn Cage, his family, and the enemies bent on destroying them in this revelatory volume in the epic trilogy set in modern-day Natchez, Mississippi—Greg Iles’s epic tale of love and honor, hatred and revenge that explores how the sins of the past continue to haunt the present.

Shattered by grief and dreaming of vengeance, Penn Cage sees his family and his world collapsing around him. The woman he loves is gone, his principles have been irrevocably compromised, and his father, once a paragon of the community that Penn leads as mayor, is about to be tried for the murder of a former lover. Most terrifying of all, Dr. Cage seems bent on self-destruction. Despite Penn's experience as a prosecutor in major murder trials, his father has frozen him out of the trial preparations--preferring to risk dying in prison to revealing the truth of the crime to his son.

During forty years practicing medicine, Tom Cage made himself the most respected and beloved physician in Natchez, Mississippi. But this revered Southern figure has secrets known only to himself and a handful of others.  Among them, Tom has a second son, the product of an 1960s affair with his devoted African American nurse, Viola Turner.  It is Viola who has been murdered, and her bitter son--Penn's half-brother--who sets in motion the murder case against his father.  The resulting investigation exhumes dangerous ghosts from Mississippi's violent past. In some way that Penn cannot fathom, Viola Turner was a nexus point between his father and the Double Eagles, a savage splinter cell of the KKK. More troubling still, the long-buried secrets shared by Dr. Cage and the former Klansmen may hold the key to the most devastating assassinations of the 1960s. The surviving Double Eagles will stop at nothing to keep their past crimes buried, and with the help of some of the most influential men in the state, they seek to ensure that Dr. Cage either takes the fall for them, or takes his secrets to an early grave.

Unable to trust anyone around him--not even his own mother--Penn joins forces with Serenity Butler, a famous young black author who has come to Natchez to write about his father's case. Together, Penn and Serenity battle to crack the Double Eagles and discover the secret history of the Cage family and the South itself, a desperate move that risks the only thing they have left to gamble: their lives.

Mississippi Blood is the enthralling conclusion to a breathtaking trilogy seven years in the making--one that has kept readers on the edge of their seats. With piercing insight, narrative prowess, and a masterful ability to blend history and imagination, Greg Iles illuminates the brutal history of the American South in a highly atmospheric and suspenseful novel that delivers the shocking resolution his fans have eagerly awaited.

Greg Iles spent most of his youth in Natchez, Mississippi. His first novel, Spandau Phoenix, was the first of thirteen New York Times bestsellers, and his new trilogy continues the story of Penn Cage, protagonist of The Quiet Game, Turning Angel, and #1 New York Times bestseller The Devil’s Punchbowl. Iles’s novels have been made into films and published in more than thirty-five countries. He lives in Natchez with his wife and has two children.

“Prepare to be surprised. Iles has always been an exceptional storyteller, and he has invested these volumes with an energy and sense of personal urgency that rarely, if ever, falter.” — Denver Post

“A superb entertainment that is a work of power, distinction and high seriousness... also (a) prime example of what the thriller--and other forms of so-called ‘genre’ fiction--can accomplish when pushed beyond traditional limits.” — Washington Post

“[The books] are page-turning entertainments with an edge of history and a deep understanding of race relations in the American South. . . . Mississippi Blood is packed with compelling characters. . . . Harrowing and spellbinding.” — Pittsburgh Post-Gazette

“This trilogy is destined to become a classic of literary crime fiction.” — Booklist (starred review)

“[The] terrific conclusion to his Natchez Burning trilogy is a sweeping story that remains intimate… Relentless pacing keeps the story churning… The trial scenes are among the most exciting ever written in the genre.” — Publishers Weekly (starred review)

“There is a graphic beauty to Iles’ writing. He uses measured words to express voluminous stories. . . . He is a masterful storyteller!” — Huffington Post on Mississippi Blood

“From his opening line, Iles draws you back into Penn Cage’s deep South in this phenomenal trilogy’s final novel (after Natchez Burning; The Bone Tree). [A] heart-racing, enthralling thriller.” — Library Journal (starred review) on Mississippi Blood

“Iles draws his characters so well, and brings off scenes so deftly.” — Houston Chronicle on Mississippi Blood

“A fabulous story. . . . Love, betrayal, murder, sadness, racism, adultery, hatred and revenge, with a bit of history thrown in. . . . The conclusion to a phenomenal trilogy.” — Biloxi Sun Herald on Mississippi Blood

“In this dramatic conclusion to a stunning piece of work, Iles works suspense until the last second, making us question whether we’d be able to keep fighting if all the precious things in our lives were taken away.” — Southern Living on Mississippi Blood

“The Natchez trilogy is a sprawling plunge into some of the worst crimes of the civil-rights era.” — Knoxville News-Sentinel on Mississippi Blood

“Almost nobody works in crime fiction at this level-or this many levels-of psychological, social, and civic sharpness, and with this clarity as well as richness of style. And maintains fiendish levels of suspense.” — Sullivan County Democrat on Mississippi Blood

“Operatic in its reach, this is still essentially a tough crime procedural, with courtroom drama that is far more blistering than the John Grisham variety.” — Financial Times on Mississippi Blood

“Just when the trial seems to be ending there are more twists and turns that I never saw coming…. A great ending for the final installment of this thrilling novel. When I read the last page all I could say was WOW! Iles never disappoints.” — ReaderToReader.com

“The breathtaking ending to an expertly crafted trilogy. . . . Page-turning suspense. Well-written and a must read.” — CriminalElement.com

“It matches, or even outdoes, the first story in excitement and drama... A searing saga of remorse and revenge.” — Huffington Post on The Bone Tree

“Natchez Burning is extraordinarily entertaining and fiendishly suspenseful. I defy you to start it and find a way to put it down; as long as it is, I wished it were longer. . . . This is an amazing work of popular fiction.” — Stephen King

“Natchez Burning obliterates the artificial distinction between genre and literary fiction with passion, grace, and considerable style. This is Greg Iles at this formidable best. It’s good to have him back.” — Washington Post

“While Natchez Burning excels as a contemporary thriller, it shines brightest when Iles draws from a deeper, and older, well in American fiction. The most compelling passages of the novel echo Iles? writer-predecessor from Natchez, Richard Wright . . . Utterly—and chillingly—believable. Epic.” — Clarion-Ledger (Jackson, MS)