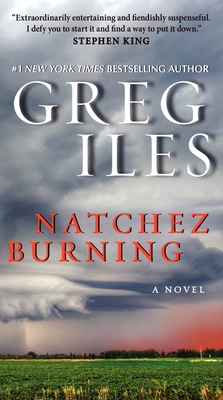 This is book number 4 in the Penn Cage series.

“Penn Cage is the mayor of Natchez, Mississippi, and life is pretty good for him, his fiancee, and his daughter, until a call from the district attorney sends his world reeling. His father, Tom, a respected and beloved family physician, is accused of murdering Violet Davis, who worked as his nurse during the turbulent 1960s. As Penn tries to save his father, he is forced to confront the brutal and violent past of his hometown during the fight for civil rights. With strong characters and a taut story line that spans 40 years, Iles delivers a blockbuster that will leave readers hungry for the next two installments in what will surely be an epic trilogy.”
— Cody Morrison, Square Books, Oxford, MS

Raised in the southern splendor of Natchez, Mississippi, Penn Cage learned all he knows of duty from his father, Dr. Tom Cage. But now the beloved family doctor has been accused of murdering the African American nurse with whom he worked in the dark days of the 1960s. Once a crusading prosecutor, Penn is determined to save his father, but Tom, stubbornly invoking doctor-patient privilege, refuses even to speak in his own defense.

Penn's quest for the truth sends him deep into his father's past, where a sexually charged secret lies. More chilling, this long-buried sin is only one thread in a conspiracy of greed and murder involving the vicious Double Eagles, an offshoot of the KKK controlled by some of the most powerful men in the state. Aided by a dedicated reporter privy to Natchez's oldest secrets and by his fiancée, Caitlin Masters, Penn uncovers a trail of corruption and brutality that places his family squarely in the Double Eagles' crosshairs.

With every step costing blood and faith, Penn is forced to confront the most wrenching dilemma of his life: Does a man of honor choose his father or the truth?

Greg Iles spent most of his youth in Natchez, Mississippi. His first novel, Spandau Phoenix, was the first of thirteen New York Times bestsellers, and his new trilogy continues the story of Penn Cage, protagonist of The Quiet Game, Turning Angel, and #1 New York Times bestseller The Devil’s Punchbowl. Iles’s novels have been made into films and published in more than thirty-five countries. He lives in Natchez with his wife and has two children.

“A whopping tale, filled with enough cliff-hanging crises for an old summer-long movie-serial. Yet there are still enough unresolved matters at the end of Natchez Burning for two already-promised sequels.” — Wall Street Journal

“Every single page of Natchez Burning is a cliffhanger that will keep you devouring just one more chapter before you put it down.” — Jodi Picoult, New York Times bestselling author of The Storyteller

“Natchez Burning is just flat-out terrific . . . its themes about race, violence, tradition, and the eternal smoldering anger of the South [bring] to mind Thomas Wolfe and William Faulkner . . . Greg Iles is back and truly better than ever.” — Scott Turow, #1 New York Times bestselling author

“Natchez Burning is extraordinarily entertaining and fiendishly suspenseful. I defy you to start it and find a way to put it down . . . This is an amazing work of popular fiction.” — Stephen King

“An absorbing and electrifying tale that thriller fans will be sure to devour.” — Library Journal (starred review)

“It’s been half a decade since Iles’ last Penn Cage novel, but, oh boy, was it worth the wait! . . . This beautifully written novel represents some of the author’s finest work, with sharper characterizations and a story of especially deep emotional resonance, and we eagerly await volume two.” — Booklist (starred review)

“Natchez Burning obliterates the artificial distinction between genre and literary fiction with passion, grace and considerable style. This is Greg Iles at his formidable best. It’s good to have him back.” — Washington Post

“The thriller of the year, of the decade even, is Natchez Burning... The first of a projected trilogy, Natchez Burning is Penn Cage’s fourth outing. But you don’t need to read its predecessors to be wholly consumed by this wonderful book. Buy, read, and marvel.” — The Times (London)