Fools and Mortals: A Novel (Hardcover) 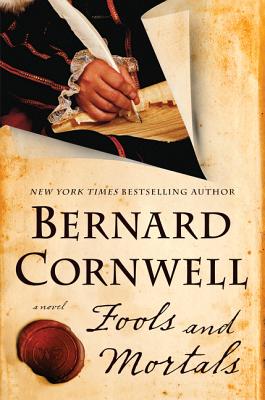 By Bernard Cornwell
$27.99
Not on our shelves at the moment, but we will order it for you.

“Cornwell is an enthusiastic amateur dramatist. His portrayal of the actors’ rivalries and superstitions is sharp and often funny. His combination of wit, adventure and deft characterization is a triumphant departure from his usual territory.”
— The Times, UK

“Marvelous…. Full of drama, both on- and offstage, and with numerous delightful, laugh-out-loud moments, this novel is an absolute joy. A must-have for anyone who loves the theater, this is easily the best book this reviewer has read this year.”
— Library Journal, starred review

“Cornwell is superb with mood and setting, whether ugly—London’s ‘reek of sewage and smoke’—or elegant: ‘city churches mangled the air by striking eleven’.... A master craftsman at work: imaginative, intelligent, and just plain fun.”
— Kirkus

“In this delightful departure from his popular military historicals, Cornwell (The Flame Bearer, 2016) conducts a boisterous behind-the-scenes romp through the often sordid world of the Elizabethan theater…. Cornwell displays his usual masterful attention to detail…. Sumptuously entertaining.”
— Booklist

“The atmosphere of the times and the world of the theatre are expertly conveyed, based as usual on thorough research. The master of historical fiction demonstrates exactly why he is so successful. Thoroughly enjoyable.”
— Historical Novel Society

“Impressively original…. Like William, Richard Shakespeare, his younger brother, is a historical figure about whom next to nothing is known, and Mr. Cornwell has fitted him out with a superb dramatic trajectory, from street urchin to acclaimed actor…. Cornwell fattens up this story with a splendor of period detail.”
— Wall Street Journal

“As skillful a blend of history and fiction as any novelist can achieve.... Anyone reading ‘Fools and Mortals’ will not see or read Shakespeare the same again.”
— San Antonio Express-News

“Gripping, exciting, and engaging. It is another great read from the masterful author. . . . A Cornwell novel is always full of suspense, and this one is no different. Time after time the suspense is intense. It will have you on the edge of your seat.”
— New York Journal of Books on Warriors of the Storm

“For those who are looking for something akin to ‘Game of Thrones’ on HBO or in George R.R. Martin’s novels on which it is based, you can’t go wrong with Cornwell’s tales of Saxons in the years before Britain became England.”
— Oklahoman on Warriors of the Storm

“’Warriors’ may be the best in the ‘Saxon Tales’ series yet…. Cornwell’s informative stories are told with appealing imagination to reveal the complicated, lengthy history of England’s formation.”
— San Antonio Express on Warriors of the Storm