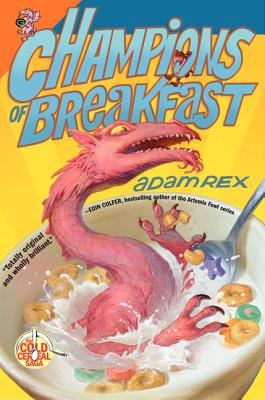 By Adam Rex
This book might be hard to find. Ask a bookseller for more information.
Special Order

This is book number 3 in the Cold Cereal Saga series.

When we last left our kid heroes, Emily had managed to halt Queen Titania by closing a rift in the time-space continuum, trapping Scott, Mick, and her other friends in the magical other-England known as Pretannica. However, time is quickly running out before Nimue, who has been working through the corrupt Goodco Cereal Company, finds another portal and uses it to bring the mythical dragon Saxbriton into our world—and launch the terrible faerie invasion. In the end, it's up to Scott and his companions to save the fate of two worlds and put an end to Goodco once and for all.

Adam Rex ends the world as we know it—and the Cold Cereal Saga—with this hilarious and dazzling epic tale.

“Shout-outs to both traditional literature and the current zeitgeist abound. . . . Enhanced with Rex’s occasional drawings, this combination of high fantasy and pop culture closes with another funny and fantastic adventure. Fans will be disappointed to see it all end.”
— Booklist

“A large pink dragon, pixie jinxes, minature queens, and plenty of snarky comments take readers on an entertaining ride. Fans of the previous books will appreciate this fun and wacky conclusion to the trilogy.”
— School Library Journal