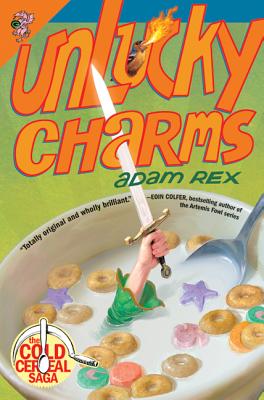 By Adam Rex
This book might be hard to find. Ask a bookseller for more information.
Hard to Find

This is book number 2 in the Cold Cereal Saga series.

For fans of Artemis Fowl and Percy Jackson & the Olympians comes the second book in Adam Rex's acclaimed Cold Cereal Saga, about three kids who must save the world from the diabolical schemes of an evil breakfast company.

Scottish Play Doe and his friends may have escaped from the clutches of the evil Nimue, but they're not out of the woods just yet.

The Goodco Cereal Company's quest to take over the world is quickly gaining momentum: it has already started to sell cereals containing the magical chemical Intellijuice and, what's worse, has kidnapped one of the world's most important public figures, the Queen of England, and replaced her with goblin impersonators.

When Scott and the others learn that Goodco is holding the real queen captive in a magical other-England, they decide to pass through a rift in the time-space continuum and rescue her—and hopefully convince the faeries to stop the invasion that will bring about the end of the world as they know it.

“A mad mix of attacks, chases, squabbles and revelations goose the main plot along while setting the stage nicely for the closer.”
— Kirkus Reviews

“Rex’s delicious sense of humor is much in evidence here…great fodder for readers who really like to dig into their adventures like a hearty and well-balanced breakfast.”
— Booklist