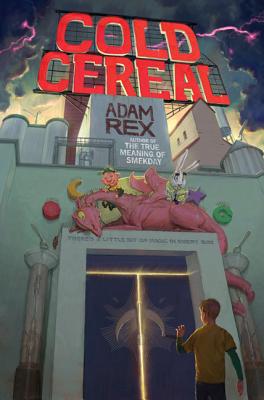 By Adam Rex
$16.99
Email or call for availability and/or price.

This is book number 1 in the Cold Cereal Saga series.

“There's a little bit of magic in every box claims the Goodco Cereal Company, and and it not exaggerating. Goodco has been holding the Fay (folks from the faerie world) prisoner and stealing their magic to put into cereal in order to make kids smarter and better looking. It will take Scottish Play Doe, aka Scott; Erno and Emily, genius brother and sister; their eight-foot-tall housekeeper, Biggs; and the escaped faerie folk, Mick, a leprechaun in a red tracksuit, and Harvey, a talking rabbit-man in tweed pants, to uncover Goodco's sinister plans and begin the journey to save the world from the evil cereal company. Delicious!”
— Karen Briggs, Great Northern Books and Hobbies, Oscoda, MI

From author Adam Rex comes the first book in the Cold Cereal Saga—a hilarious, clever, and action-packed adventure series with an educational hook.

Scottish Play Doe—aka Scott—is used to being a little different. Sometimes he hallucinates things no one else can see. But then one of these hallucinations tries to steal Scott's backpack, and he comes face-to-face with an honest-to-goodness leprechaun named Mick who's on the run from, of all things, the Goodco Cereal Company. With the help of his friends Erno and Emily, Scott and Mick uncover Goodco's sinister plans—and take the first steps in saving the world from the evil cereal company.

Like the Artemis Fowl Series and the Percy Jackson and the Olympians Series, the Cold Cereal Saga takes elements of familiar mythology—in this case, Arthurian legend and Irish folklore—and reimagines it in the modern world with a cast of relatable characters and myriad magical beings. The story is told from multiple points of view, and there are dozens of illustrations—including "commercial breaks"—and stories within the story.

“With an off-the-wall sensibility that fans of the author’s True Meaning of Smekday will recognize with delight, Rex brings together unconventional allies to be hunted by agents of the huge Goodco Cereal Company.”
— Kirkus Reviews (starred review)

“Rex takes his magically delicious premise seriously, finding the thin line between absurdity and comedy, while giving this story more gravitas and depth than might be expected.”
— Publishers Weekly

“The story is filled with wildly imaginative elements and clever wisecracks, but the humor is couched within a rich, complex plot that’s filled with engaging characters and concepts. Readers who enjoy fantasies that are equal parts hilarious and exciting will eagerly await the next two in the series.”
— School Library Journal (starred review)

“An expansive cast of colorful characters (including Merle Lynn, an accountant) keep the surprises coming. Reader interest and suspension of disbelief never flag in this humorous, consistently entertaining, well-spun yarn.”
— The Horn Book

“Rex supports his centrifugal imagination with tight storytelling, effervescent characterization, and strong imagery and metaphor. . . . will leave readers anxious for the sequel.”
— ALA Booklist

“The divinely demented Adam Rex strikes again! Cold Cereal is exciting, strange, and deliciously different. His deft mixing of myth with modernity is flat-out fabulous.”
— Bruce Coville, author of My Teacher Is an Alien