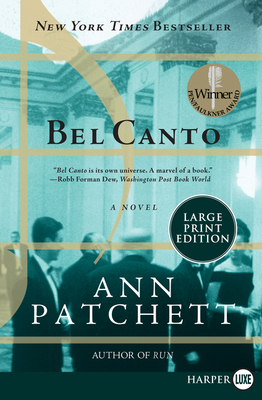 Somewhere in South America, at the home of the country's vice president, a lavish birthday party is being held in honor of the powerful businessman Mr. Hosokawa. Roxanne Coss, opera's most revered soprano, has mesmerized the international guests with her singing. It is a perfect evening -- until a band of gunwielding terrorists takes the entire party hostage. But what begins as a panicked, life-threatening scenario slowly evolves into something quite different, a moment of great beauty, as terrorists and hostages forge unexpected bonds and people from different continents become compatriots, intimate friends, and lovers.

Ann Patchett is the author of eight novels, four works of nonfiction, and two children's books. She has been the recipient of numerous awards, including the PEN/Faulkner, the Women's Prize in the U.K., and the Book Sense Book of the Year. Her most recent novel, The Dutch House, was a finalist for the Pulitzer Prize. Her work has been translated into more than thirty languages. TIME magazine named her one of the 100 Most Influential People in the World. She lives in Nashville, Tennessee, where she is the owner of Parnassus Books.