Like No Other Lover: Pennyroyal Green Series (Mass Market) 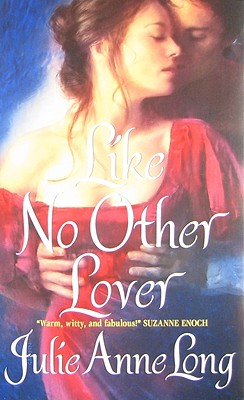 Like No Other Lover: Pennyroyal Green Series (Mass Market)

This is book number 2 in the Pennyroyal Green series.

It's the last chance for Cynthia Brightly, the ton's most bewitching belle. Driven out of London by a secret scandal, she must find a grand husband at the Redmonds' house party before word of her downfall spreads all over England. Unfortunately, someone at Pennyroyal Green is already privy to the whispers of broken engagements and dueling lovers: Miles Redmond, renowned explorer and—thanks to his brother's disappearance—heir to the family's enormous fortune.

Miles set his sights on Cynthia once, at a time when the ambitious beauty thought herself too good for a second son. But now he's heir apparent, relishing his control. He strikes a bargain with her: he'll keep Cynthia's steamy secrets and help her find a husband among the guests—in exchange for a single kiss.

What could be the harm in a simple kiss? Cynthia is about to discover that it's enough to unleash fierce passion—and that Miles Redmond is most certainly like no other lover in the world.