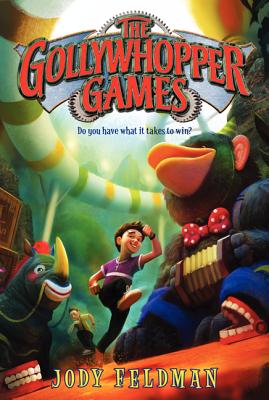 This is book number 1 in the Gollywhopper Games series.

Jody Feldman's popular, award-winning novel about a group of kids playing the Gollywhopper Games—the fiercest toy company competition in the country—will appeal to fans of The Amazing Race and Charlie and the Chocolate Factory!

Gil Goodson has been studying, training, and preparing for months to compete in the Gollywhopper Games. Everything is at stake. Once Gil makes it through the tricky preliminary rounds and meets his teammates in the fantastical Golly Toy and Game Company, the competition gets tougher. Brainteasers, obstacle courses, mazes, and increasingly difficult puzzles and decisions—not to mention temptations, dilemmas, and new friends (and enemies)—are all that separate Gil from ultimate victory. An interactive and inventive page-turner perfect for young readers who love to solve puzzles!

Jody Feldman has always loved riddles and brainteasers and word games, and she lives in a city on a river whose name contains four s's, two p's, and four i's. Jody has written as many books for young readers as there are players in a doubles tennis match. To find out how many brothers she has, take the number of bases on a baseball diamond and divide it by the number of times Grover Cleveland was president of the United States.