The House on First Street: My New Orleans Story (Hardcover) 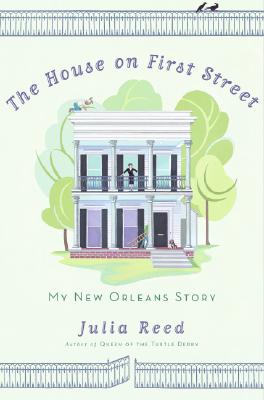 By Julia Reed
Email or call for price
Hard to Find

Julia Reed went to New Orleans in 1991 to cover the reelection of former (and currently incarcerated) governor Edwin Edwards. Seduced by the city's sauntering pace, its rich flavors and exotic atmosphere, she was never entirely able to leave again. After almost fifteen years of living like a vagabond on her reporter's schedule, she got married and bought a house in the historic Garden District. Four weeks after she moved in, Hurricane Katrina struck.

With her house as the center of her own personal storm as well as the ever-evolving stage set for her new life as an upstanding citizen, Reed traces the fates of all who enter to wine, dine (at her table for twenty-four), tear down walls, install fixtures, throw fits and generally leave their mark on the house on First Street. There's Antoine, Reed's beloved homeless handyman with an unfortunate habit of landing in jail; JoAnn Clevenger, the Auntie Mame—like restaurateur who got her start mixing drinks for Dizzy Gillespie and selling flowers from a cart; Eddie, the supremely laid-back contractor with Hollywood ambitions; and, with the arrival of Katrina, the boys from the Oklahoma National Guard, fleets of door-kicking animal rescuers and the self-appointed (and occasionally naked) neighborhood watchman. Finally, there's the literally clueless detective who investigates the robbery in which the first draft of this book was stolen. Through it all, Reed discovers there really is no place like home.

Rich with sumptuous details and with the author's trademark humor well in the fore, The House on First Street is the chronicle of a remarkable and often hilarious homecoming, as well as a thoroughly original tribute to our country's most original city.

Julia Reed grew up in Greenville, Mississippi. She is a contributing editor at Newsweek and is the author of the essay collection Queen of the Turtle Derby. She lives in New Orleans.

“Reed is a breezy writer who nicely captures the despair and elation of seeing the city slowly come back to life.”
— Chicago Sun-Times

“What emerges from a heartrending, soul-stirring, rib-tickling and palate-prickling banquet of details is why Ms. Reed cannot leave New Orleans: love. It’s an undeceived devotion to a place and particularity that is admirable, and almost astonishing, in our increasingly deracinated culture.”
— Wall Street Journal

“Reed shares this sliver of her life with a light, conversational tone, and though somewhat tangential, she conveys the richness of pace and flavor of the Big Easy as life gets back to ‘normal’ without pretense.”
— Christian Science Monitor

“ … Reed recounts with humor those and other home-improvement nightmares in a story that is part ‘Money Pitt’ and part love letter to her adopted home town.”
— Washington Post, Front Page Feature

“Reed will enthrall you with the Big Easy spirit of rebuilding, determination, and great eats along the way.”
— Madison County Herald

“Julia Reed knows how to live. She also knows how best to write about it in hilarious, sensual and mouthwatering detail....This book is so poignant and delicious, you may want to eat it instead of read it.”
— Adriana Trigiani, bestselling author of the Big Stone Gap series and Lucia, Lucia

“In The House on First Street, Julia Reed, one of the cleverest crafters of prose writing today, tackles the country’s most fascinating and frustrating city....With her usual keen eye for the quirky and outrageous, Reed finds much to amuse the reader in this delightful volume.”
— Cokie Roberts, ABC and NPR News, author of LADIES OF LIBERTY

“Wow! This is the most brilliant and delightful memoir to come out of post-Katrina New Orleans. With great literary panache and a throaty humor, Julia Reed captures the magical allure of the city, its food and its people...destined to be a classic.”
— Walter Issacson, bestselling author of Einstein and Benjamin Franklin.