Matters of Chance: A Novel (Paperback) 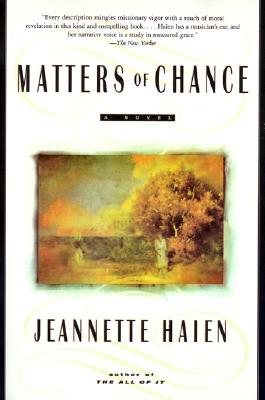 Matters of Chance: A Novel (Paperback)


Ships quickly (1-7 days)
Matters of Chance is a glorious, aptivating novel about Morgan and Maude Shurtliff, who fall in love and marry in the years before World WarII. Unable to have children of their own, Morgan and Maude adopt twin girls. The four go home to their beautiful house in the country outside ofNew York City and begin to settle into what they hope will be a long and happy life. When the twins are still young, Morgan is called to serve inWorld War II, leaving Maude to raise her daughters alone. Jeannette Haien has rendered Morgan's war experiences with astonishing detail, just as she has captured the American post-war era with a precision that is unrivaled in recent fiction.
Jeannette Haien is the author of the acclaimed novel The All of It , winner of the Sue Kaufman Prize for First Fiction from the American Academy of Arts and Letters. In addition to her career as a writer, Jeannette Haien is well known as a concert pianist and teacher. She and her husband, a lawyer, live in New York City and Connemara, Ireland.