Small Is Beautiful: Economics as if People Mattered (Paperback) 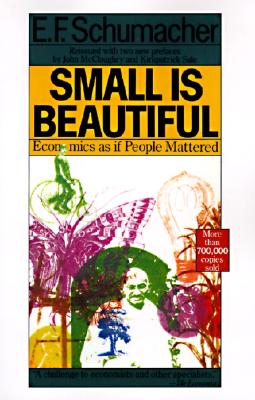 “Nothing less than a full-scale assault on conventional economic wisdom.” —Newsweek

One the 100 most influential books published since World War II

Hailed as an “eco-bible” by Time magazine, E.F. Schumacher’s riveting, richly researched statement on sustainability has become more relevant and vital with each year since its initial groundbreaking publication during the 1973 energy crisis. A landmark statement against “bigger is better” industrialism, Schumacher’s Small Is Beautiful paved the way for twenty-first century books on environmentalism and economics, like Jeffrey Sachs’s The End of Poverty, Paul Hawken’s Natural Capitalism, Mohammad Yunis’s Banker to the Poor, and Bill McKibben’s Deep Economy. This timely reissue offers a crucial message for the modern world struggling to balance economic growth with the human costs of globalization.

“Embracing what Schumacher stood for--above all the idea of sensible scale--is the task for our time. Small is Beautiful could not be more relevant. It was first published in 1973, but it was written for our time.”

“Small Is Beautiful changed the way many people think about bigness and its human costs.”

“Nothing less than a full-scale assault on conventional economic wisdom. . . . Schumacher believes economists need a new set of values, to obtain maximum well-being with minimum consumption.”