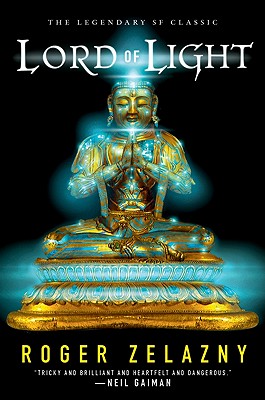 So begins Roger Zelazny's masterpiece, Lord of Light. The novel won the Hugo Award in 1968 for best novel and was nominated for the Nebula. Zelazny, a master craftsman, produced a marvel---a science fiction novel that can be read as easily as a fantasy---about the descendants of a crashed starship on a world where in order to survive turned toward technologies that gave some of them both immortality and the power of gods. But the culture has stagnated and things need to be shaken up.  Sam plans to do just that.

“Funny, wise, and infused with a sense of wonder and knowledge….Nobody else made myths real and valuable in the way Roger Zelazny could.”
—Neil Gaiman

Lord of Light is a classic tale of the far future from the incomparable Roger Zelazny. Winner of the Hugo Award—one of six Zelazny received over the course of his legendary career, as well as three Nebula Awards and numerous other honors—Lord of Light stands with Joe Haldeman’s The Forever War and Frank Herbert’s Dune as one of the seminal novels that changed the way readers looked at science fiction. Experience it and you will understand why New York Times bestselling sf author Greg Bear says, “Reading Zelazny is like dropping into a Mozart string quartet as played by Thelonius Monk.”

Roger Zelazny burst onto the SF scene in the early 1960s with a series of dazzling and groundbreaking short stories. He won his first of six Hugo Awards for Lord of Light, and soon after produced the first book of his enormously popular Amber series, Nine Princes in Amber. In addition to his Hugos, he went on to win three Nebula Awards over the course of a long and distinguished career. He died on June 14, 1995.