Fatal Discord: Erasmus, Luther, and the Fight for the Western Mind (Hardcover) 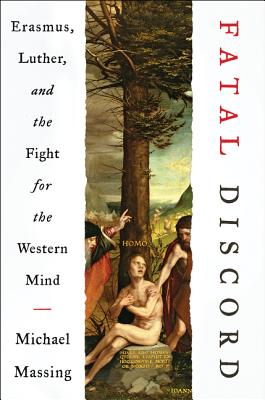 By Michael Massing
$45.00
Not on our shelves at the moment, but we will order it for you.

The Reformation signaled the shift in Western Civilization from one dominated by orthodoxy and allowed for the intellectual and religious dis-integration that later gave rise to the secular West. Here in this extensive study of two of the primary movers, Luther and Erasmus, Michael Massing lays out the historical background with meticulous attention to detail, and draws telling comparisons between the major thinkers of early Christianity and how issues people like Augustine and Jerome grappled with reemerged in the early 16th Century, demanding answers, and causing the deep divisions latent with the Church to finally splinter what till then had appeared to be a homogeneous intellectual world. The personalities of the two men ultimately brought them into conflict, resulting in more splintering. Massing writers with skill and insight. Very accessible, recommended for anyone interested in how civilization, particularly ours, evolves.

“Last year saw a profusion of books about Martin Luther to mark the 500th anniversary of his posting the 95 Theses. Massing widens the lens wondrously, bringing in Erasmus, the great humanist foe of Luther, and showing how their rivalry set the course for much of Western civilization. Reviewing the book, Rebecca Newberger Goldstein applauds this “inspired approach”: “Massing, a journalist, has produced a sprawling narrative around the rift between the two men, laying out the sociological, political and economic factors that shaped both them and Europe’s responses to them, and tracing their theological disputes back to the earliest days of Christianity,” she writes. “Though a massive amount of material is marshaled, Massing’s journalistic skills keep the story line crisply coherent.” --New York Times

Erasmus was the leading figure of the Northern Renaissance. At a time when Leonardo, Michelangelo, and Raphael were revolutionizing Western art and culture, Erasmus was helping to transform Europe’s intellectual and religious life, developing a new design for living for a continent rebelling against the hierarchical constraints of the Roman Church. When in 1516 he came out with a revised edition of the New Testament based on the original Greek, he was hailed as the prophet of a new enlightened age. Today, however, Erasmus is largely forgotten, and the reason can be summed up in two words: Martin Luther. As a young friar in remote Wittenberg, Luther was initially a great admirer of Erasmus and his critique of the Catholic Church, but while Erasmus sought to reform that institution from within, Luther wanted a more radical transformation. Eventually, the differences between them flared into a bitter rivalry, with each trying to win over Europe to his vision.

In Fatal Discord, Michael Massing seeks to restore Erasmus to his proper place in the Western tradition. The conflict between him and Luther, he argues, forms a fault line in Western thinking—the moment when two enduring schools of thought, Christian humanism and evangelical Christianity, took shape. A seasoned journalist who has reported from many countries, Massing here travels back to the early sixteenth century to recover a long-neglected chapter of Western intellectual life, in which the introduction of new ways of reading the Bible set loose social and cultural forces that helped shatter the millennial unity of Christendom and whose echoes can still be heard today. Massing concludes that Europe has adopted a form of Erasmian humanism while America has been shaped by Luther-inspired individualism.

Michael Massing is a former executive editor of the Columbia Journalism Review and a frequent contributor to The New York Review of Books. His work has also appeared in the New York Times, the Nation, the Atlantic, and the Los Angeles Times. He is the author of The Fix, a critical study of the U.S. war on drugs, and Now They Tell Us: The American Press and Iraq. He is a co-founder of the Committee to Protect Journalists and sits on its board. He received a bachelor’s degree from Harvard College and a master’s degree from the London School of Economics and Political Science. In 1992, he was named a MacArthur Fellow, and in 2010-2011 he was fellow at the Leon Levy Center for Biography at CUNY. A native of Baltimore, he lives in New York City.

“Brilliantly tracing the crisscrossing paths of the two most important thinkers of the sixteenth century, Michael Massing shows that where Martin Luther and Erasmus of Rotterdam parted ways—on the adequacy of human reason, the legibility of Scripture, and the nature of God—is where the grievous fracturing of the modern world begins. The stakes of their increasingly bitter conflict were high and enduring and we today are the heirs of it. The hero of Fatal Discord is the irenic, cosmopolitan Erasmus, who insisted until the end of his days, amid deepening religious violence between Protestants and Catholics across Europe, that men and women were capable of choosing to live generous and peaceful lives and that this is what a loving God wanted for them. A stunning work of historical detection, deeply learned and elegantly written, Fatal Discord adds depth and dimension to the most urgent questions of our times. ”
— Professor Robert A. Orsi, author of History and Presence and Between Heaven and Earth: The Religious Worlds People Make and the Scholars Who Study Them.

“Fatal Discord is a striking departure for Mr. Massing, a distinguished journalist whose work has appeared in outlets like the New York Review of Books and the Columbia Journalism Review. . . . Mr. Massing has read widely and intelligently, and he writes superbly. Fatal Discord is surely the only book on either Erasmus or Luther that general readers will ever require. It reads like a lively lecture series in that most beleaguered of university subjects, Western civilization.”
— Wall Street Journal

“Massing superbly accomplishes the mammoth task of writing a dual biography of Desiderus Erasmus (1466–1536) and Martin Luther (1483–1546) that places the pair within their historical context...this is a masterly work. Massing manages to juggle the complicated biographies and life work of both Erasmus and Luther while giving the reader a well-written, comprehensive background of pre-Reformation theology.”
— Publishers Weekly (starred review)

“In this riveting narrative, Massing recounts how the incendiary friar [Martin Luther] eventually quarrels with and finally repudiates his erstwhile leader, so sundering the church that Erasmus hopes to reform from within, and opening up an epoch-defining gap between Protestant evangelism and cosmopolitan humanism.”
— Booklist (starred review)

“In this dual biography, Massing deftly treats the lives of both [Erasmus and Luther], setting them in the context of the times… this engaging tale of the contentious relationship between two precursors of the modern world… provides much-needed historical background and reflection on a major period in church and world history.”
— Library Journal (starred review)

“Michael Massing, a former executive editor of the Columbia Journalism Review, thinks these theological differences fatefully divided Christianity in ways that reverberate now in American evangelicalism. In his new book Fatal Discord, he brilliantly chronicles how the rift between both men deepened.”
— Financial Times