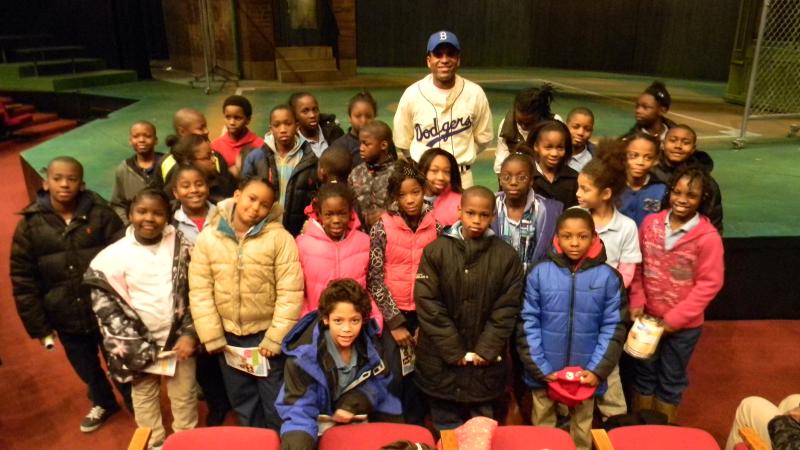 This year’s Left Bank Books Angel Tree is collecting donations to provide Ferguson-Florissant School District students with a copy of Ghost by Jason Reynolds and a ticket to see the world premiere stage adaptation written by Idris Goodwin, co-comissioned and produced by Metro Theater Company!

Left Bank Books is collecting $20 donations, each of which will provide one Ferguson-Florissant student with a paperback copy of Ghost to add to their personal library and a ticket to see a student matinee performance of the stage version in February 2020.  Donations can be made in-store, over the phone at 314-367-6731, or on this page!

"We have been fans of Jason Reynolds going back to our first collaboration with him in 2015," says Sarah Holt, Children's and Teen Specialist at Left Bank Books.  "His stories and the way he tells them have a unique appeal to young people simply because he speaks to them as equals, about their interests and issues, and in their language.  When we saw that Metro Theater Company, another favorite partner, was at the forefront of bringing his work for young people to the stage, we knew we had to be involved.  We couldn't think of a more fitting effort for Angel Tree this year than to make sure as many students as possible can experience this important story of developing your future through honestly engaging with your past, and we're happy to work with our friends at the Ferguson-Florissant Public School District to make that happen.  Our hope is that students, teachers, families and other members of their community will be able to use this experience to talk not only about the story of Ghost and the issues it raises, but the act of storytelling through different art forms."

In Ghost, we meet Castle Crenshaw, nicknamed Ghost.   Running is all he has ever know, but he's been running for the wrong reasons.  It all started with running away from his father, who, when Ghost was a very little boy, chased him and his mother through their apartment, then down the street, with a loaded gun, aiming to kill.  Since then, Ghost has been the one causing problems--and running away from them--until he meets Coach, an ex-Olympic medalist who sees something in Ghost:  Crazy natural talent.  If Ghost can stay on track, literally and figuratively, he could be the best sprinter in the city.  Can Ghost harness his raw talent for speed, or will his past finally catch up to him?  Ghost is the first novel in the four-book Track series, a finalist for the National Book Award for Young People's Literature, and nominated as one of America's best-loved novels by PBS's The Great American Read.

Jason Reynolds is a New York Times-bestselling author, a Newbery Award honoree, a Printz Award honoree, National Book Award honoree, a Kirkus Award winner, a two-time Walter Dean Myers Award winner, an NAACP Image Award winner, and the recipient of multiple Coretta Scott King honors.  The American Bookseller's Association's 2017 and 2018 spokesperson for Indies First, his many books include When I Was the Greatest, Boy in the Black Suit, All American Boys (cowritten with Brendan Kiely), As Brave As You, For Every One, the Track series (Ghost, Patina, Sunny, and Lu), and Long Way Down, which received both a Newbery Honor and a Printz Honor.  He lives in Washington, DC.

Idris Goodwin is the Producing Artistic Director of Stage One Family Theater in Louisville, Kentucky, for which he penned the widely-produced And in This Corner...Cassius Clay, which won the distinguished new play award from The Association for Theatre and Education.  Other widely-produced plays include his hip hop-influenced "break beat play series":  How We Got On, Hype Man: a break beat play, and Realness, in addition to the controversial This Is Modern Art, cowritten with Kevin Coval.  He's been recipient of InterAct Theater's 20/20 Prize and The Playwrights' Center's Mcknight Fellowship.  His adaptation of Ghost is a commission by Nashville Children's Theater and Metro Theater Company.

Metro Theater Company was founded in St. Louis in 1973 by Webster University theater student Zaro Weil and Kirkwood elementary school teacher Lynn Rubright with the goal of bringing creative drama to young people in schools.  Now in its 47th season, Metro Theater Company has toured over fifty productions--including countless original works--to 41 states, as well as to Canada, Italy, Japan, and Taiwan.  Two million people across the country and world have seen their work.  The company now reaches nearly 25,000 young people annually through in-school residencies, an annual mainstage season at the Grandel Theatre, school tours across St. Louis, and regular appearances at such esteemed venues as the John F. Kennedy Center for the Performing Arts.

Ghost will perform at Grandel Theatre February 2 through March 1, 2020, with student matinees Monday through Friday and public performances on Fridays and Sundays.

The Ferguson-Florissant School District is a full-accredited district providing a comprehensive educational program for more than 11,000 children in preschool through 12th grade.

To donate online, simply add the item below to your cart and check out as usual.  You can combine a donation with other purchases.